The Art of Weaving 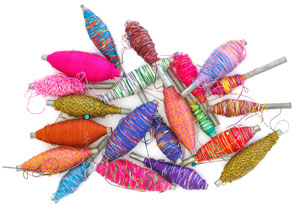 Older than knitting and crocheting, weaving is a truly ancient craft that dates back to the prehistoric era. However, looms were created much later and now play a prevalent role in the craft.

There are three different basic forms of weaving: plain weave, satin weave, and twill. Each has their own method and purpose.

Plain weave was designed to create fabrics that will stand the test of time, such as those used for clothing or furnishing. In this form of weaving, the warp and weft use a criss-crossed pattern formed by alternating between over one and under one. The end result appears almost like a checkerboard pattern, similar to what you often see in woven baskets.

This type of weave can go by a few other names, including tabby weave, linen weave, or taffeta weave, and is used by fabrics such as chiffon, taffeta, and organza.

A satin weave creates a fabric that looks just like it sounds: silky and shiny. Using fabrics such as polyester and silk, this weave uses four or more cool fill or weft yarns over a warp or vice versa, creating the shimmer so common in these fabrics.

Lastly, twill is a method of weaving that passes the weft thread over one or more of the warp threads, then under two or more in a repetitious pattern. An offset between the rows gives the weave a diagonal pattern. It drapes well, and is used to create fabrics like chino, denim, and tweed.

If you’re new to weaving, you may find yourself scratching your head at some of the terminology. Don’t fret! You’ll pick them up rather quickly. Below is a list of some of the most common terms used within this practice. Take a look:

Just like there are multiple types of weaves, there are also different types of looms. Each loom is designed to help you create a specific type of weave depending on the method you’re using and what you’re trying to create. This includes: